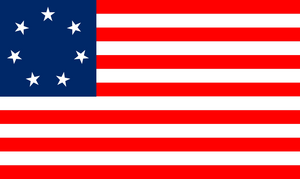 The New United States (NUS) was the up-timer name for Grantville's revolutionary republic formed towards the end of 1631, when they earned goodwill in central Germany by forming a loose alliance with Gustavus Adolphus's cavalry forces under Alex Mackay. It became a member state of the short lived Confederated Principalities of Europe after August 1632.

The joined forces of Mackay's cavalry company and the NUS miners fought several memorable battles during 1631: Battle of the Crapper, the Battle of Jena and the two phase battle against Spanish regular forces sent from the Spanish Netherlands at the Battle of the Wartburg (ca. October 1632).

The NUS was as closely modeled on the original United States as circumstances would allow. There was a Constitution, which called for a bicameral legislature, a presidency, and a supreme court. It also sought to protect many of the freedoms and rights the U.S. Constitution enshrined. The states of the NUS included Badenburg; then Suhl; by April 1632, all of southern Thuringia; by December 1, 1633, all of Thuringia.

Due to the technological impact and political and military power of the New United States, Thuringia became the strongest economic province of the Confederated Principalities of Europe.[1]

Due to OTL figures depicted US dollar bills being unknown to down-timers, NUS President Michael Stearns decreed new designs to be made for NUS use. Tom Stone was the one to incorporate his own designs into the NUS bills, due to being the only waterproof green ink manufacturer in the world.[2] NUS dollars are represented in bills of $1, $5, $10, and $20. The $1 depicts an eight-point buck, the $5 features hands kneading dough, the $10 depicts a loaf of bread, and the $20 depicts the OTL figure Johnny Cash.[3]

Community content is available under CC-BY-SA unless otherwise noted.
Advertisement